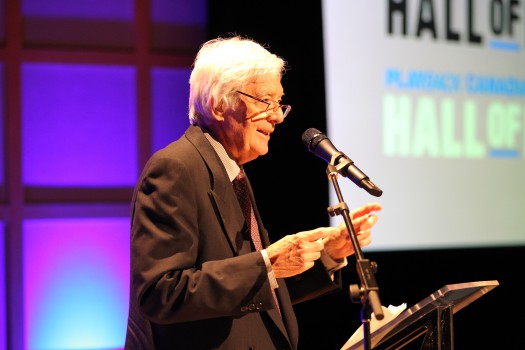 Playback’s Hall of Fame was founded in 2007 to recognize the extraordinary achievements of individuals to the Canadian screen industry. In order to qualify for the Hall of Fame, individuals must have a minimum of 25 years dedicated commitment to Canadian film or television, have made significant contributions to the industry during that time (either at home or abroad), demonstrated significant professional achievements and commitment to establishing, developing and maintaining the highest standards of excellence in Canadian film and television.

Playback’s inductees are selected annually by Playback editorial staff in concert with an advisory board that spans multiple facets of the entertainment industry. Inductees are selected to include a range of categories: talent, film, TV, creative, industry builder and posthumous.

To read more about current and past advisory boards, go here.

To see the full list of inductees, go here.

Photo: Denis Heroux was recognized for his groundbreaking filmmaking at the 2011 Playback Canadian Film and Television Hall of Fame award ceremony. Read more about his remarkable career here.