The Vancouver Film Studios is a full-service production facility which includes 210,500 sq. ft. of purpose-built sound stages, over 100,000 sq. ft. of support space, as well as on site lighting and grip equipment, and communications management, provided by their two subsidiaries, Pacific Backlot and Signal Systems.

In addition to being Canada’s first carbon neutral film studio, they became the first full production film and television facility in the world to achieve B Corporation Certification early in 2021. This puts them amongst only four percent of companies who have successfully certified worldwide and means that they have adopted a framework for how they operate and make decisions; considering people, sustainability, community engagement and financial performance equally.

They hope to set a new benchmark for the industry and to inspire others to work alongside them to grow it in the most sustainable way possible. This includes the construction of the very first LEED Certified sound stage in Canada set to open by the end 2021. 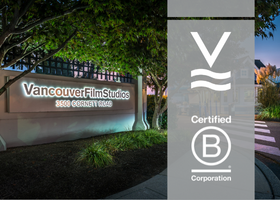