Since opening in 2012, Toronto’s Alibi Entertainment has consistently recorded double-digit annual growth. And while that won’t be the case in pandemic-plagued 2020, company president James Hyslop remains unflappable.

“We’re very bullish on making shows and just want to be flexible enough so that we can adapt as the buying community evolves,” Hyslop says.

Cameras weren’t rolling as the industry wrestled with health and safety protocols and insurance issues, but Hyslop anticipates an imminent return. Alibi recently had a six-part documentary Fault Lines series greenlit with TVO that it expects to start shooting this fall, while a new drama series is temporarily delayed due to talent availability. Details have yet to be announced.

Several Alibi productions have focused on cuisine, the most successful being the company-launching Carnival Eats, which follows Noah Cappe as he samples the sometimes outrageous offerings of North American fair-circuit vendors. After eight seasons, it continues to be a showcase program for Discovery’s Cooking Channel in the U.S. and Food Network Canada. But production was shut down during season nine due to COVID-19. 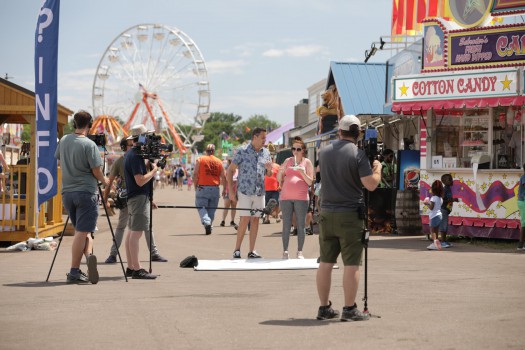 A behind the scenes look at the filming of Carnival Eats at the Northern Wisconsin State Fair.

“There are no fairs and carnivals right now,” Hyslop says. “Everybody agreed the best thing to do is to put it on pause and figure out what’s going to happen when things get to a new normal. And we want to be prepared to hit the ground running when that happens.”

Part of that preparation has seen Alibi push forward with a diverse and aggressive development slate on which it spent $600,000 in 2019 by increasing staff and optioning a variety of existing IP across the scripted, factual and kids/animation genres. This includes scripted property Running to Lose, a half-hour political dramedy based on Noah Richler’s autobiographical novel The Candidate, in the pipeline at Bell Media. The Factual team has series in active development with Discovery and History US.

Alibi’s production spend last year amounted to $14 million for projects including Carnival Eats and Sarah off the Grid (HGTV Canada), in which design maven Sarah Richardson builds her rural dream home. It also made the two-part doc special Northern Gold for TVO, exploring how gold mining has shaped the country, Spaceman for CBC and Titanic, The New Evidence for Discovery.

Hyslop says docs fit are a natural fit and are where many of our team members started their careers. “It keeps our teams engaged,” he says. “We try to find and keep good people by giving them the opportunity to work on different projects to expand and hone their skill set with increased creative challenges.” Hyslop adds, “There are natural crossover skills and experiences.”

They have also brought acclaim, as in the episode “Lost Secrets of the Pyramid” for CBC’s The Nature of Things, a copro with the UK’s Windall Films that nabbed a Canadian Screen Award. 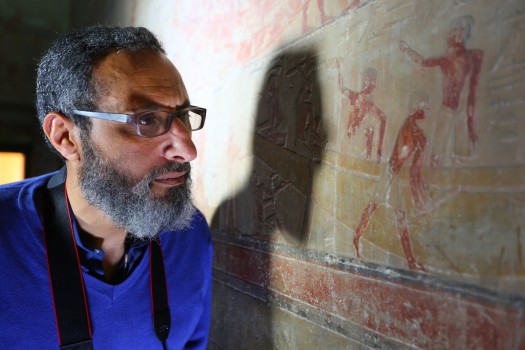 Nautical Archaeologist, Mohamed Abd El-Maguid, examining markings on the wall as seen in Lost Secrets of the Pyramid.

The prodco is developing children’s properties through its Alibi Pivotal Kids division, a joint venture with Pivotal Media. Scripts are done for the animated Zombie Pets, which is being developed with support from the Shaw Rocket Fund and Epic Story Media on board for merchandising. It is also developing the live-action scripted Emma, M.D. with broadcaster WildBrain, focusing on a teenager employed as a medical intern.

Alibi also produces digital content and branded entertainment for high-profile clients including McDonald’s, Clif Bar, and Loblaws. It is now going a step further by offering brands the ability to integrate content and ecommerce on companies’ digital platforms. Partners include Toronto concert venue El Mocambo, which would be able to livestream concerts while allowing viewers to purchase related merchandise with a simple click.

To Hyslop this is an example of a natural next step, as opposed to a panicked reaction to COVID-19. He adds that Alibi has not pivoted to low-budget, from-home production models during the pandemic.

“We’ve remained within our demonstrated expertise,” he says. “We’re not going to do anything we don’t really know anything about. What we do know about is telling stories, and we’re going to adapt to what’s coming around the corner as opposed what’s directly in front of us.” 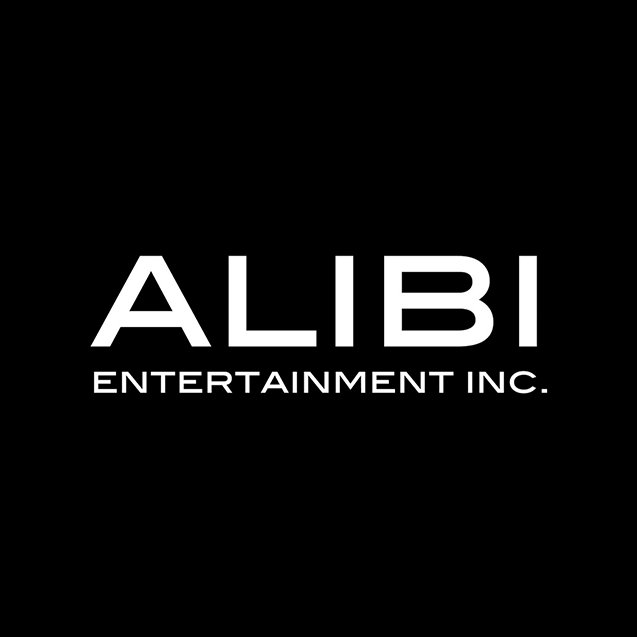