9 Story Media Group racked up a mammoth $148.2 million’s worth of independent production spend in 2019, doubling its total from just two years before.

And with two new greenlights since lockdown began – and renewals for Wild Kratts and Daniel Tiger’s Neighbourhood – the biggest crisis the Canadian production sector has ever faced doesn’t appear to be slowing 9 Story’s momentum. Those two new greenlights have come in the form of CG-animated series Karma’s World (Netflix), created by rapper/actor/producer Chris “Ludacris” Bridges, and an unnamed series for Apple TV+.

It’s not smooth sailing by any stretch of the imagination but the kids-content company, which transitioned its entire 1,000-plus team to work from home within 11 days of the production shutdown in March, has weathered the COVID-19 crisis with aplomb thus far. 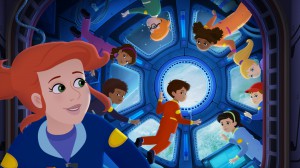 Get ready to blast off into space with Ms. Friz and her students in the brand new specials from The Magic School Bus: Rides Again.

“When we look at our fiscal year [which ended Aug. 31], we feel like we were able to escape 2020 unscathed, if you will,” president and CEO Vince Commisso tells Playback. “Of course we’re being impacted by COVID-19, but I feel like the effect has been bruising rather than debilitating.”

Propelled by a mix of organic and acquisitive growth, 9 Story’s growth trajectory in recent years has been impressive. Despite its overall production spend leaping from $74.8 million in 2017, to $101.7 million in 2018 and then $148.2 million in 2019, Commisso insists 9 Story is a company of “careful scale” and not a consolidator building “scale just for scale’s sake.”

The most recent addition to the 9 Story portfolio was Bali, Indonesia-based animation studio BASE. “We needed to secure a supply source, look at efficiencies and also to have input creatively from more places in the world,” says Commisso of having a presence in Asia, as the global OTT players increasingly look for a plurality of storytelling perspectives.

While animation has always been 9 Story’s core line of business, 2020 was planned as somewhat of a coming out party for its burgeoning live-action division, launched last year. New York-based production company Out of The Blue, acquired by 9 Story in 2018, has been key to those plans, securing a commission for a live-action property (details were not available at press time) and significantly expanding both its production and development operations.

The pandemic has complicated those plans slightly, with challenges surrounding live-action production amid the ongoing threat of COVID-19. There’s no intention to pause or rethink its live-action plans though, says Commisso. “We’re not stopping it at all,” he insists. If anything, the feeling at 9 Story HQ is that the production shutdown has created an opportune moment to get forensic with those plans for a time when production can safely resume.

“The era of having everything you need and more resulted from [people saying] ‘let’s start writing it, let’s go into production, and then we’ll make sure we over-resource the production so that, if we start going in a creative direction that wasn’t as intended, we can service that,’” he says. “Now, we’re in a place where we’re developing more, and writing more scripts, so we can be clear of what those resources are. It’ll give us the chance to be more efficient, and have a better creative foundation for when we go into production.”

A growing focus on its live-action business helped push 9 Story’s development spend up to $1.8 million in 2019, from $1.5 million the prior year.

Martin and Chris’s creature adventures continue in their 6th season of Wild Kratts!

There’s evolution taking place on the distribution side as well. Aside from receiving an immediate sales boost as lockdown protocols came into effect and broadcasters looked for finished content to populate their schedules, the company’s 4,500-hour distribution catalogue has become a source from which to reimagine IP already within its library. After acquiring the CCI Entertainment library a number of years ago, 9 Story is developing two new properties based on IP from that catalogue. The same is true for Breakthrough Entertainment’s kids library, which 9 Story acquired in 2018, with the company looking at a number of potential titles there too.

While it’s unclear when the industry will be able to resume “traditional” operations, Commisso says the time in between must be spent strategizing and implementing ways to make 9 Story a better business than it was before the pandemic.

“There will be some economic impact, there will be new winners and losers. But your obligation, if you’re sitting in my seat, is to see what the learnings are and how we can try to be better – it’s just a question of how and in what way. If we don’t come out of this better, we will have blown a tremendous opportunity.”